Born and raised Temorian, Peter Harper, at the helm of the Museum’s operation 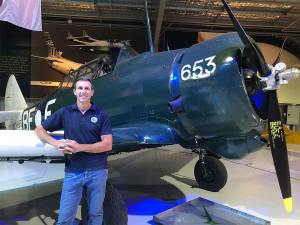 We are very honoured to have such an amazing team here, at the Temora Aviation Museum. There are many fantastic individuals who are very passionate about aviation and our community and who are making the everyday magic happen, so that our visitors can enjoy discovering more about the history of our nation’s aviation, people and machines who have been serving our country.

Who are these Museum’s individuals who are helping us stay on our mission? In the series of the articles, we attempt to tell the story of people behind the Museum’s walls, counters and warbirds.

Today, we are talking with Peter Harper, the Museum’s General Manager.

Tell us a little about your role (and history) at the Temora Aviation Museum?

I have just ticked over 12 years at Temora Aviation Museum and have worked in a few different roles. I am now the General Manager, in charge of overseeing all operations of this incredible living museum.

What did you do before joining Temora Aviation Museum?

I started my career as a spare parts interpreter in the automotive and agricultural industries. I was a retained fire fighter with Fire & Rescue NSW for 14 years and prior to joining the Museum team I spent two years as a contract fire fighter at RAAF Base Wagga Wagga and Kapooka Army Base.

Which is your favourite warbird in the collection?

It is difficult to pick just one Warbird, but I would have to say the Wirraway, not because of its military history, and certainly not for its performance, but because my grandfather spent time worked on the Wirraway as an airframe fitter in the during WWII.

Who is your aviation hero?

I would have to say that my aviation hero is each and every veteran and their families which I have encountered during my time at the Temora Aviation Museum. Their amazing stories and sacrifices just never cease to amaze me.

What do you love the most about working at the Museum?

For me it comes down to the variety of roles that I fill, we are only a small team, yet the organisation is the most diverse and complex operation I have ever been involved with. Being an operational flying Museum, the challenges that we face as a team are many and frequent. The recent partnership with the RAAF has certainly brought new challenges but also greater rewards that just a couple of years ago we never thought possible. But to be able to look back on what we as a team have achieved, and the possibilities of what the future holds, it is extremely satisfying to say that I have contributed to this wonderful organisation.