The Cessna O-2A in the Temora Aviation Museum Collection is one of only two O-2A’s flown in Australia.

In 1966, the United States Air Force (USAF) realised it needed a replacement for its O-1 Bird Dogs in Vietnam. The Cessna 337 was selected and, with relatively minor modifications to incorporate under wing weapons mounts and weapon release systems, was sent to war in Vietnam designated O-2A. The Cessna O-2A is an all metal, high wing, retractable gear aircraft incorporating twin tail booms and an engine mounted at the front and rear of its fuselage pod. A total of 501 Cessna O-2A’s were delivered to the USAF. 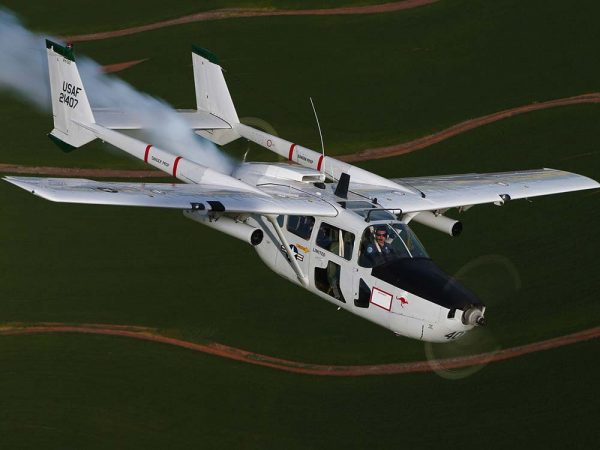 The Temora Aviation Museum’s O-2A was manufactured in 1967 and assigned Serial Number 67-21407. In August of that year it was flown across the Pacific to Vietnam. The aircraft was based at Pleiku and served in a combat environment until April 1971. During its service, the aircraft was struck by enemy fire on many occasions and was retired from the USAF in January 1980. After being stored at Davis-Monthan Air Force Base in Arizona for 14 years, the aircraft was privately restored and placed on the US civil register in 1994.

Upon being purchased by David Lowy in August 2000, the aircraft was transported to Temora and donated to the Temora Aviation Museum in December 2000.

The Museum’s Cessna O-2A was remarked to resemble the one flown by Australian Forward Air Control pilot David Robson. As Jade 07, Flying Officer David Robson flew over 240 missions in the O-2A and controlled over 80 air strikes in support of the Australian troops.

The Museum uses the Cessna O-2A to ferry pilots, engineers and equipment around the country as well as displaying it’s capabilities at their Showcase Days and airshows.