The de Havilland Vampire first flew in Britain in September 1943 and three years later it was ordered for the RAAF. The Vampire’s pod is constructed mainly of wood and the wings, tail and booms are made of metal. The aircraft was developed initially as a single seat fighter but was subsequently developed into a night fighter, fighter/bomber and trainer versions. A total of 3,987 were built between 1943 and 1961 in six countries, including Australia. 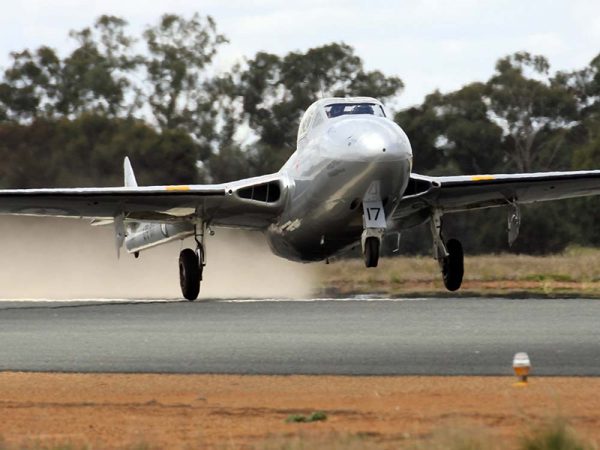 The Museum’s Vampire (Construction No. 4139) was built in 1951, delivered to the RAAF on 22 May 1958, and put into service with the Central Flying School at East Sale in Victoria. It was subsequently transferred to No. 1 Advance Flying Training School at Pearce in WA. The aircraft served most of its RAAF time in the west until disposed of in January 1970. A79-617 was sold and exported to the USA where after many years of storage it was returned to flying condition and operated privately until purchased by David Lowy in 1998. After being shipped back to Australia, the Vampire underwent extensive restoration and repainting before arriving at the Temora Aviation Museum. In February 2001, David Lowy donated the Vampire to the Temora Aviation Museum, and it remains the only Australian built Vampire flying in Australia.

The vampire has not flown for many years. The Museum is restoring the Vampire to flight with a target of late 2020. The engine has been installed and engine runs commenced.

This aircraft is now part of the Air Force Heritage Collection after being generously donated by the Temora Aviation Museum in July 2019.