This Tiger Moth is the oldest airworthy example in Australia. The Tiger Moth is an open tandem cockpit biplane that has a fuselage constructed from steel tubing and covered in a combination of fabric and thin plywood. The wings and tail plane are constructed of timber and covered with fabric. The Gypsy Major engine, fitted to VH-UVZ, was manufactured, under license, by General Motors Holden in Australia. De Havilland manufactured 8,811 DH 82 Tiger Moths between 1931 and 1945. A total of seven countries produced the Tiger Moth.

VH-UVZ was the second DH-82A imported from the UK into Australia and was registered on 12 August 1936 to Airflite Ltd at Mascot in Sydney. 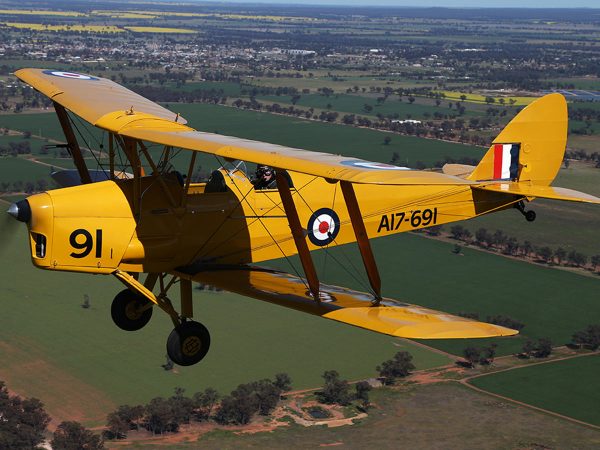 On 21 April 1937, VH-UVZ crashed into Sydney Harbour. According to newspaper reports at the time, it was circling above a steamer, which was departing from Circular Quay, when the aircraft stalled and spun into the water. The occupants were rescued with minor injuries and VH-UVZ was retrieved to fly again.

VH-UVZ was impressed into the Royal Australian Air Force (RAAF) on 19 August 1940, becoming A17-691 and served at No. 10 Elementary Flying Training School in Temora from July 1943 to the end of the war. In November 1999, David Lowy acquired the aeroplane and donated it to the Temora Aviation Museum during December 2000. The aircraft is painted in the yellow markings that it carried as a trainer during World War II.