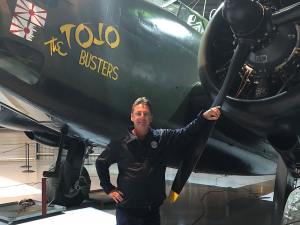 We feel very honoured to have Murray Kear as the Chief Executive Officer of the Temora Aviation Museum since October 2016.

Having been a pilot for the last 20 years himself and having volunteered as Manager for the NSW Scouts Air Activity Centre, working here at the Museum is a dream come true for Murray.

Murray spent much of his career in emergency services in NSW, grew up in Sydney and now has a home in Temora as well.

At the Museum, every aircraft finds a special place in the Murray’s heart. However, probably as a father of three children, he feels very strongly about these three warbirds: Spitfire XVI, the Cessna A 37B Dragonfly and the Lockheed Hudson Bomber.

Today, we are catching Murray between his busy days to ask about his work here, at the Museum.

Tell us a little about your role (and history) at the Temora Aviation Museum?

I have been in those positions since I joined the Museum in October 2016.

It is a great pleasure to lead such a dedicated and professional team here at the Museum, and we are proud of what we do, being able to share our facility and the stories of the men and women who have supported military aviation over the last century.

What did you do before joining Temora Aviation Museum?

I have spent much of my career in emergency services in NSW. Having joined the then NSW Fire Brigades in 1980, I moved through the ranks to become Assistant Commissioner in 2003. In 2008 I accepted the position of Commissioner of the NSW State Emergency Services. I left that position in 2013 and enjoyed semi-retirement and operated a consultancy up until I was offered the position of CEO at the Museum. Having been a pilot for the last 20 years and having volunteered as Manager for the NSW Scouts Air Activity Centre, working here at the Museum is a dream come true!

Which is your favourite warbird in the collection?

Trying to pick my favourite warbird in the collection is like trying to say which is your favourite child. They all hold a very special place. If I could have three favourites, because I have three children, it would be the Mark XVI Spitfire, the Cessna A 37B Dragonfly and the Lockheed Hudson Bomber.

Where are you from?

I am from Sydney and have lived there all my life. I now also have a house here in Temora.

Who is your aviation hero?

Again, that is a hard question. Over my life and in this role at the Museum I get to meet and read about so many amazing people. The two people that always rise to the top for me are Nancy Bird Walton and Bert Hinkler.

What do you love the most about working at the Museum?

Apart from working with a great bunch of people, staff, pilots and volunteers, I love hearing and reading the feedback from people who come to the Museum, who read the stories of the veterans and watch our aircraft display. If we can make history come alive for them then it is very rewarding.