The Spitfire Mk VIII is an all-metal, semi-monocoque construction with a canti-levered wing, fabric covered elevators and rudder and retractable landing gear.

A total of 20,334 Spitfires were built before, during and after the war, with a total of 1652 Spitfire Mk VIII variants built.

This aircraft was the last Spitfire acquired by the Royal Australian Air Force (RAAF). It was built by Supermarine in England in 1944, test flown and then shipped to Australia. The Air Force took delivery of the aircraft in April 1945, and, with World War II drawing to a close, the aircraft was not required on active service and was instead placed into storage. 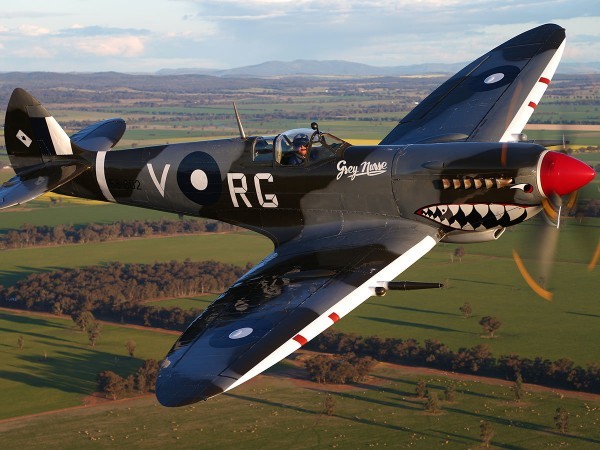 After the war, the aircraft was utilised at Sydney Technical College as an instructional airframe. It was then acquired by Mr. Sid Marshall who stored it, disassembled, at Bankstown until 1982. Mr. Colin Pay of Scone obtained the Spitfire and began a detailed restoration program, which was completed in 1985 when the aircraft flew again.

The aircraft is painted in the green and grey camouflage colours worn by the RAAF aircraft defending Darwin during World War II and in operations in the South West Pacific. The aircraft carries the military serial number A58-602 and markings and of Wing Commander R.H. (Bobby) Gibbes OAM DSO DFC* aircraft.