VH-BFF was the first ex-military aircraft permitted to fly on the Civil Aircraft Register.

Commonwealth Aircraft Corporation (CAC) manufactured the Wirraway at Fisherman’s Bend in Victoria. The aircraft was an Australian development of the North American Aviation NA-16-1A and NA-16-2K aircraft. It is powered by Australian manufactured versions of the Pratt & Whitney R1340 Wasp engine. CAC built a total of 755 Wirraways from 1939 to 1946.

VH-BFF was built in 1944 and its RAAF history, although brief, encompassed the drama of both flight training and active service.

The aircraft’s military service details are: 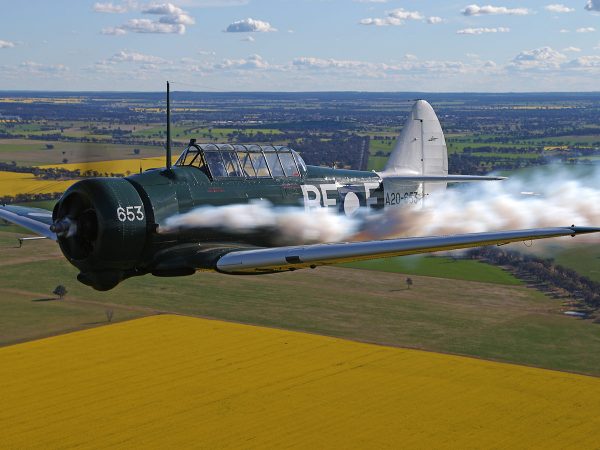 The aircraft on display is a composite of factory new and restored components. It was rebuilt in Victoria and was completed in 1975. Its assigned construction number is 1105.

David Lowy purchased VH-BFF from Malcolm Long in 1999 and donated it to the Temora Aviation Museum in December 2000.

The Wirraway is painted in 5 Squadron RAAF colours, as it was when it was based in Bougainville, Papua New Guinea.