Winner of an Army competition in June 1950 for a two seat observation and liaison aircraft, the Cessna Model 305 (as it was designated by its manufacturer) was based on the company’s highly successful civil Model 170 of the late 1940s and 1950s.

Built to replace the World War II vintage Grasshopper family of aircraft, the Cessna L-19 (US Army designation) was powered by a 213hp engine, as opposed to the 65hp unit of it predecessor. This allowed the aircraft to be far more flexible in its parameters of operation, and made the Bird Dog ideally suited to the Forward Air Control (FAC) role that it subsequently made its own, during the early years of the Vietnam War. 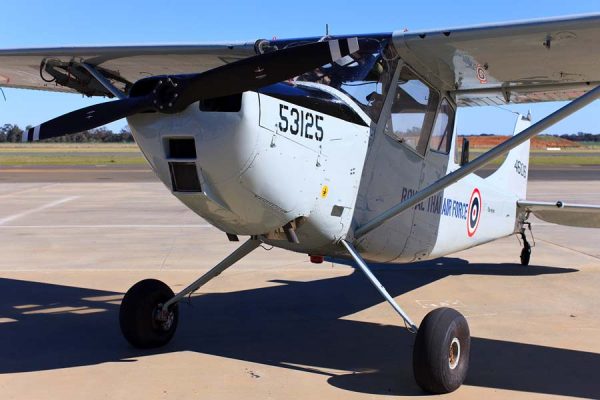 Re-designated the O-1 in 1962, Cessna had delivered 3,431 examples by the time production ceased in that same year – the bulk of these had been built as O-1s (L-19As), with later variants introducing updated equipment and the ability to carry wing stores like target marking rockets.

The exploits of the O-1E over the Vietnamese jungle are legendary, USAF and South Vietnamese pilots, pin-pointing enemy troop locations through communication with ‘friendlies’ on the ground prior to calling in air strikes to hit targets marked with smoke rockets. Although long since retired from USAF service, a modest number of O-1’s continue to thrive with a handful of air arms across the globe, whilst surplus Bird Dogs have recently enjoyed a renaissance across North America and Australia.

This aircraft has been placed at Temora Aviation Museum on loan by its owner Gordon Glynn and is regularly flown at the Museum’s Aircraft Showcase Days.