Colin Pay was born on 26 October 1932 and from an early age he developed an interest in flying and all things mechanical. He learned to fly at Narromine in western NSW using all he could afford from his wages to satisfy the passion that continued throughout his life. After gaining his licence he flew a variety of aircraft and later became an instructor at the Narromine Aero Club. His first aircraft was a De Havilland Tiger Moth and with this he established Pays Aerial Service which later became one of the largest and most successful aerial work companies in Australia.

Col was one of Australia’s pioneers of aerial topdressing, spraying and crop dusting and helped to develop many of the techniques now common practice in the industry. From his base in Scone, NSW the business expanded to include operations outside Australia and further diversified to include aerial fire fighting and aircraft sales.

Col’s passion for aviation led him into the realm of “warbird” operations before that term had even been coined. In partnership he owned an Australian built Mustang fighter that was kept at Narromine and later reluctantly sold to buy a washing machine. Today such a thought would not be contemplated, but in the 1950s and 1960s the warbird movement did not exist and few such aircraft were permitted to fly. Colin again renewed his acquaintance with the Mustang when he purchased and restored the pillar box red VH-AUB at his Scone maintenance facility. With this aircraft repainted in its former RAAF markings Col became a regular performer at air shows throughout NSW. 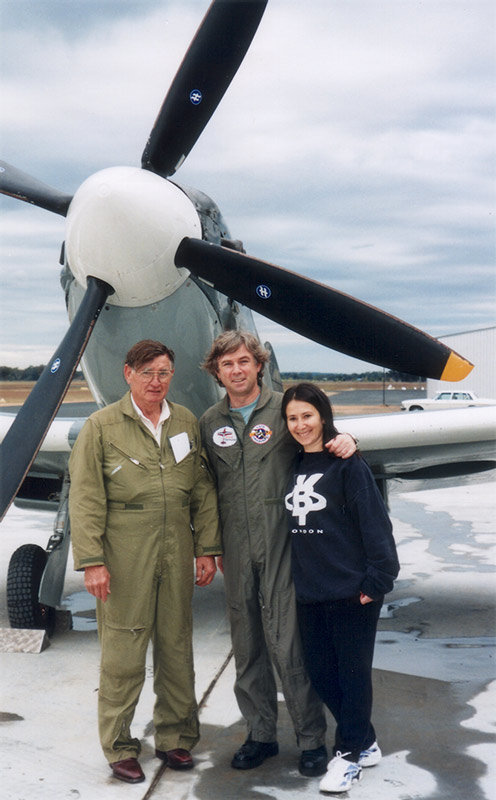 Col expanded his interest in warbird aircraft with the purchase of a Spitfire Mk.VIII from the estate of the late Sid Marshall. This aircraft required a complete rebuild and many overseas commentators believed that the task could not be performed in this country. The aircraft’s first flight was the crowning achievement of the warbird movement in Australia up until that date, and its operation by Col between 1985 and 2000 brought this legend to thousands of enthusiasts and veterans alike. Colin maintained his association with the Spitfire following its sale to the Temora Aviation Museum and flew it at Temora whenever the opportunity arose. Other wartime fighters and trainers became part of his collection including Australia’s first airworthy P-40 Kittyhawk which again emerged from his workshops as one of the best examples of its type anywhere in the world. At the time of the P-40’s first flight, Col’s collection boasted an example of each of the most significant fighter aircraft operated by the RAAF during the Second World War. Through Col’s efforts, Scone became a Mecca for aircraft enthusiasts and this was enhanced through the bi-annual “Warbirds over Scone” air shows that brought spectators from every state and overseas.

In addition to the aerial work operations, Col’s business expanded to include the acquisition and sale of a variety of ex-military aircraft. This greatly diversified the range of types flying in Australia and saved most from potential scrapping. With others he retrieved North American T-28s from Laos, Cessna O-1 Birdogs from Thailand and Vietnam and Cessna A-37 Dragonflys from Vietnam. Other types were also obtained from as far afield as Italy. It can truly be said that the nature and range of the Australian warbird movement as we see it today is due in no small part to the efforts of Colin Pay.

Colin Pay was an astute businessman, hard bargainer and was both well liked and respected throughout the Australian aviation industry. He was a highly skilled and experienced pilot in a wide variety of aircraft types from the Wright Flyer replica to jets. He was a regular performer at Temora’s flying weekends bringing his Mustang or recently restored P-40, thrilling the crowds with his professional displays.

Col is survived by his wife Dianne, son Ross and daughters Jillian and Helen.

He shall be greatly missed by everyone at Temora and across the Australian aviation industry.