George Spaulding Hale was born in Hobart, Tasmania on 30th October 1930. He grew up in the suburb of Claremont and from an early age loved everything to do with aircraft and aviation.

On 26th February 1951 he joined the Royal Australian Air Force and undertook his flight training at No.1 Flying Training School at Point Cook, Victoria, the Home of the RAAF. Here, he trained on Tiger Moths and Wirraways and was highly successful being named Dux of the No.7 Post War Course.

He transferred to Williamtown RAAF base and converted to jets while assigned to No.4 Operational Training Unit (Fighter), where he flew the De Havilland Vampire Mk.30. He later noted that his conversion to jets involved no dual instruction, no mach meters and no ejection seats, something that would not be considered in today’s modern fighter training programmes.

Having accumulated a total of 288 hours flight time and with the rank of Sergeant, he was assigned to No.77 Squadron and flew from Australia to Iwakuni, Japan aboard a QANTAS Douglas DC.4. At Iwakuni, he converted to the Gloster Meteor F.8 fighter in 14 days with a series of battle formation practice, live ground rocketry, straffing, and mock dogfights – finally completing his conversion on 12th December 1952. He flew from Iwakuni to Seoul, Korea on 13th December 1952 and joined 77 Squadron at their base at Kimpo (K.14). He described his initial impressions of Korea as being cold and bleak with inhospitable terrain. 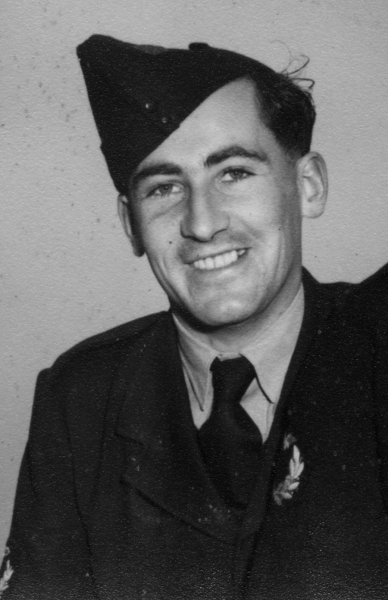 He flew his first mission of the Korean War on 14th December 1952 on an Area Reconnaissance over the East Coast of North Korea. He later stated that on this mission they were flying close to MiG Alley and were told repeatedly to “Keep our heads up and locked”. George quickly fitted in with the other squadron pilots and undertook many armed reconnaissance, road reconnaissance and ground attack missions. He named his first assigned Meteor “Halestorm and Snow” a partial reference to his elder brother who served with the army in Korea and had flown with George in one of the squadron’s two-seat Meteor trainers.

He was assigned a new Meteor F.8, A77-851, which he named “Halestorm”. Although flying close to MiG Alley, George indicated that he had not been briefed regarding potential MiG engagements and there were no specific squadron orders regarding such engagements.

On 27th March 1953 at approx 1420 hrs while on armed road reconnaissance, Hale, with Sgt David Irlam saw two MiG.15 fighters which they immediately engaged but at the same time were attacked by two more MiGs. Irlam was hit and took no further part in the engagement. Hale engaged one of these MiGs scoring hits and observed the Soviet fighter roll over and dive from 5000 to 4000 feet emitting dense black smoke.  Hale was attacked by two more MiGs which he also engaged then a third MiG pair attacked him from behind. Hale scored hits on the lead MiG of this third group which emitted dense white smoke or fuel vapour that almost completely obscured the aircraft. Both MiGs commenced a steep near vertical climb and Hale started to attack the lead’s wingman when his cannons stopped firing, out of ammunition. The MiGs departed and Hale turned and headed for Kimpo at low level. Hale was credited with one MiG probably destroyed and one MiG damaged. Thus ended the last air to air combat operation in which the RAAF has been engaged to this date.

Hale continued on operations with 77 Squadron in Korea until 14th June 1953 at which time he left for Australia having flown 131 combat missions including bomber escort, rocket strikes, road and rail armed reconnaissance, scrambles and combat air patrols.

Back in Australia he was transferred to 11 Squadron and converted to Neptune maritime reconnaissance aircraft operating at Pearce Air Base in Western Australia, attended the Australian Joint Anti-Submarine Warfare School at Nowra NSW and later qualified as a Neptune Captain. In 1954 he completed an Instructor’s Course at East Sale and again was Dux of the course later instructing on Wirraways at Point Cook where his RAAF career began. He joined the staff at the Central Flying School at East Sale and became an instructor and examiner on the Vampire trainer, Dakota, Lincoln, Wirraway, Winjeel and Neptune thereafter flying both the Mustang and single seat Vampire at the RAAF’s Air Armament School. He then was seconded to the De Havilland Company at Bankstown to check on the production of and to write the handling notes for the Vampire T.35A.

Hale left the RAAF on 21st March 1958 with the rank of Flying Officer.

He joined QANTAS and flew Dakotas, Lockheed Super Constellations, all models of the Boeing 707 and the Boeing 747 up to the 300 series. At QANTAS he was appointed Senior Check and Training Captain on both the 707 and 747 and finally retired on 28th February 1987. Despite his retirement he continued his association with QANTAS acting as a consultant for both pilot training and recruitment until 1992.

George Hale can easily be described as a “Man’s man”. His easy going nature made him an excellent instructor and his superb flying skills stood him in good stead both during his RAAF career and his subsequent professional life as an airline pilot.

He shall be remembered as the RAAF’s last air-to-air combat pilot, a consummate professional in all aspects of his flying career and a loving family man.

He is survived by his wife Helen, daughters Andrea and Jacqueline and son Robert.

George Hale became a Friend of the Temora Museum following the Museum’s acquisition of the world’s sole airworthy Meteor F.8. It was immediately decided that the most appropriate representative RAAF paint scheme for this aircraft would be that of George Hale’s “Halestorm”. Considerable effort was made to ensure that the work would accurately reflect his aircraft’s markings down to the minutest detail. The Museum was fortunate to have George visit on a number of occasions to watch his Meteor fly and to provide us with the details of his flying career.