The Gloster Meteor is an all metal, twin jet engine, retractable gear aircraft. The F.8 was the most built of all Meteors, with 1,522 being produced. The Gloster Meteor was the first operational jet to fly with the Royal Air Force. The earliest recorded combat successes were by Meteor F.1s, against V1 flying bombs on 4 August 1944. A Meteor was also used in the first tests of a ground level ejection seat.

In May 1946 a F.3 Meteor was taken on charge by the Royal Australian Air Force, becoming the first RAAF jet fighter. It was not until 1951 that Meteors entered regular service with the RAAF and then they did so with a true “baptism of fire”. Meteor F.8 aircraft were taken into action by 77 Squadron RAAF, in Korea, against the Mig-15. 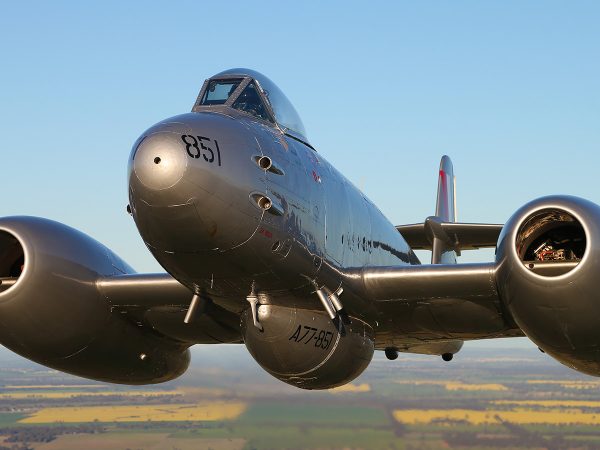 The Meteor was built by Gloster in 1949 and carried RAF serial number VZ467, serving until 1982. Its last military role was as a target tug. After being retired from the RAF, the Meteor was privately owned and operated in the UK. Upon being purchased by the Temora Aviation Museum, the aircraft was disassembled, transported to Australia and reassembled at Bankstown NSW. In August 2001, the Meteor flew from Bankstown to its new home in Temora, where it is maintained in an airworthy condition, making it the only Gloster Meteor F.8 flying in the world.

Since being re-painted by the Museum, the aircraft carries the markings of a Korean War era Meteor operated by RAAF 77 Squadron and flown by Sgt. George Hale.