A significant commitment to preserving historical military aircraft was made by the Chief of Air Force, Air Marshal Geoff Shepherd when he signed an agreement with the Temora Aviation Museum during a ceremony at the museum on Saturday November 26th 2005.

Under the agreement, co-signed by the Founder and President of the Museum Mr David Lowy, the Royal Australian Air Force (RAAF) will loan one of its historic aircraft to the Temora Aviation Museum (TAM). Following the establishment of the RAAF Heritage Advisory Council, the agreement represents a further move to ensure that important pieces of the RAAF’s heritage are not only preserved but made available to the Australian public. 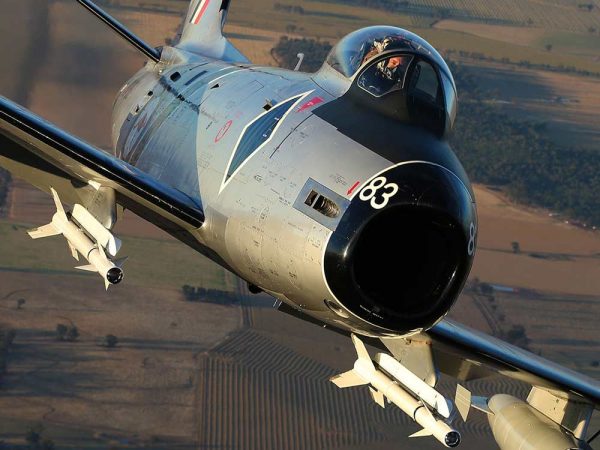 Recognising the significance of the agreement, the Chief of Air Force commended the Museum for the initiative and continued support. “This agreement will help safeguard an important piece of Australian aviation history”,  Air Marshal Shepherd said. “Mr Lowy’s shared passion for aviation heritage and the expertise of the museum staff will go a long way to supporting the RAAF’s endeavours to keep Australian war history accessible to future generations”.

As a result of the agreement, the Sabre jet, flown throughout Australia and South East Asia by the RAAF, was restored to flying condition by TAM and has become a feature of our regular schedule of flying days, which are open to the public.

Delivered from Commonwealth Aircraft Corporation (CAC) in November 1957, A94-983 was brought into service at No. 1 Aircraft Depot at Laverton before undergoing test flights at the Aircraft Research and Development Unit for three weeks. Upon completion, the aircraft was delivered to No. 78 Wing at Williamtown, and was subsequently allotted to No. 3 Squadron at Butterworth in October 1958. In February 1959, the aircraft made a wheels-up landing at Butterworth, with extensive damage to the underside of the airframe, and was transported back to CAC at Avalon for the survey and costing of repair work.

Transferred to No. 11 Squadron of the Royal Malaysian Air Force in December 1971 as serial no FMI983, the aircraft flew until 1976, when it was grounded awaiting disposal. ‘Rescued’ from its fate by No. 75 Squadron, based at Butterworth, an ‘E’ Servicing was carried out over 12 months and A94-983 flew again in July 1978 in RAAF hands. A94-983 was then shipped back to Australia, and restored by No. 2 Aircraft Depot. A94-983 was first displayed in public in March 1981. In November 1984, the aircraft carried out a forced landing and over-run at Bendigo, Victoria. The aircraft continued to be displayed by the RAAF Museum, and operated under the auspices of the Caribou and Historic Aircraft Section (CHAS) located at Richmond until 1992, and was relocated to Point Cook upon the disbandment of CHAS in 1997.

In January 2006, A94-983 was transported by road to the Temora Aviation Museum where a comprehensive return to service program commenced. Two Rolls Royce Avon engines (including one spare engine) were delivered to Temora onboard a RAAF C-130J Hercules aircraft. The restoration of the Sabre commenced in May 2006 and culminated with the successful post maintenance check flights, the first one taking place on Thursday 16 July 2009.

Currently the Sabre is grounded due to Martin Baker no longer supporting legacy ejection seats such as in the Sabre. The RAAF is working towards a solution with a third party to return the Sabre to flight, although a date for this is yet to be determined.